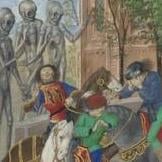 The Doom of Valyria- Any Chance?

Go To Topic Listing The World of Ice and Fire
×