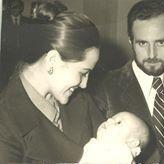 The Iron Isles and the Riverlands (book spoilers)