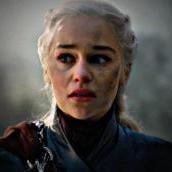 Why is Olenna REDWYNE suddenly the head of House Tyrell?

Go To Topic Listing E10: The Winds of Winter
×