GRRM: Speculation that Aegon "the Conqueror" knew about the Others 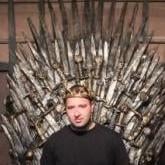