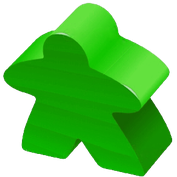 The Walking Dead: The Judith and Negan Show (Comic Spoilers)

By HokieStone, February 13, 2019 in Entertainment