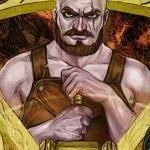 Hearts in Conflict with Themselves