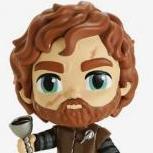 By BasterdsAndBrokenThings, May 16, 2019 in A Feast for Crows