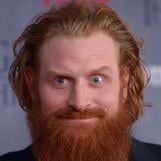 Who's hyped for Episode 6 for unintended reasons?