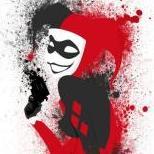 What did you think of Drogo and Daenerys x Drogo?