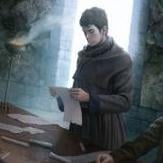 Potential for different dialects, languages, and cultural identities in Westeros.

By The Young Maester, October 19 in General (ASoIaF)