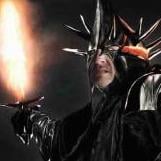 By Eltharion21, January 16 in The World of Ice and Fire