Victarion at the battle off Fair Isle 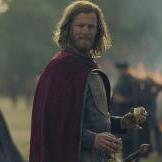