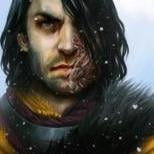 Will Tyrion and Tysha ever reunite?