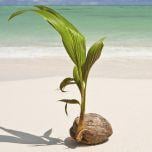 [Potential Spoilers] The Exodus Theory and the Show