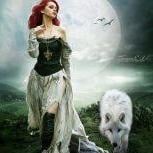 'The Killing Word' -- A Re-examination of the Prologue